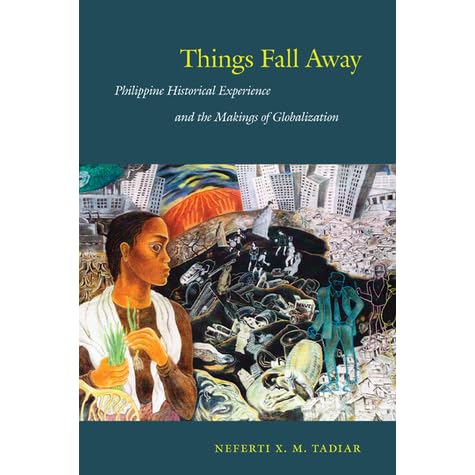 Tadiar “develops a theory and method of reading experience as living labor,” which she hopes will aid the “collective efforts to come to a new understanding of politics in the contemporary global moment” (4). Living labor from the Philippines (a country in a “permanent crisis”) has been feminized, and the nation then profits from this exploitation of labor as a resource, with the surplus appropriated by the upper class in the Philippines. Thus Tadiar places her work within the framework of subaltern studies and Marxist-feminism, restating that women are subordinated within patriarchal states and the capitalist order. She explores further, though, looking at examples from feminist, urban, and revolutionary literary works from the 60s-90s, which “tell a Philippine story of world transformation from the perspective of historical experiences that ‘fall away’ from global capitalist and nation-state narratives of development…” (5). She looks into creative literature as a “representation of lived experiences of particular people,” and suggests that it is rather to be viewed as “experiments in broader social projects…in the very imagining of modern political communities…” (6). Experience, she writes, “does not belong to some deeply personal realm,” but it consists of this “human activity of mediation between self and social reality… (which then) help to constitute both individual selves and the socioeconomic conditions to which they are subject” (10). The book argues that the “historical potential of experience as a social activity lies in its creative character” (11). She places “social experience as a form of creative or living labor that is subject to exploitation,” adding to Marx’s argument that the modus operandi of capitalism is exploitation (11). Tadiar also works with this notion of historical experience “as the concrete articulation between subjective activity and socioeconomic structures” (14). Feminist and social movement literature can thus be seen as “cultural software.” Literature is not only a means of representing experience, but also constitutes “technological interventions in the process of subjective production of existing social relations” (16). As “worldly artifact(s),” literary works are “figurations of possibilities of life” (17), which can be treated as both ethnographic material for the study of social imagination, and theoretical resource for writing an alternative history of the present that “foregrounds the creative work and transformative potential of marginalized social experiences and their unrecognized role in the making of the contemporary world” (18)