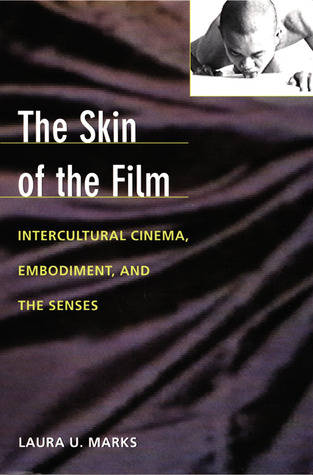 Marks, Laura. 2000. The Skin of the Film: Intercultural Cinema, Embodiment, and the Senses. Durham and London: Duke University Press.

The book’s title serves as a “metaphor to emphasize the way film signifies through its materiality”, and it also suggests that vision is tactile (xi). The author argues that even though cinema is audiovisual in form, its synesthesia and “haptic visuality” (as if touching the film with one’s eyes) enable the viewer to experience cinema as multisensory (23). Engaging with what she calls “intercultural cinema,” Marks suggests that “meaning occurs in the body, and not only at the level of signs” (xvii). By “intercultural cinema,” Marks refers to films produced by cultural minorities in the West, and those which are also “characterized by experimental styles that attempt to represent the experience of living between two or more cultural regimes of knowledge…” (1). She also suggests that the experience of cinema is mimetic and that cinema itself is a mimetic medium, such that it is “capable of drawing us into sensory participation with its world…” (215). This attention to the creation of an aesthetic that involves the body and the senses is a challenge to highly visual Western modes of representation. Intercultural cinema also “begin[s] from the inability to speak, to represent objectively one’s own culture, history and memory” (21). Looking at various intercultural films, Marks suggests that “if vision can be understood to be embodied, touch and other senses necessarily play a part in vision” (22). Cinema thus “activates a memory that necessarily involves all the senses” (22), and “sense experience is at the heart of cultural memory” (195). For example, the depiction of food in intercultural cinema is an alternative exploration of cultural memory, p. 234). Intercultural works also tend to be ambivalent in their representation of the sensory experience — and this characteristic is what distinguishes them from the “exoticizing films that serve their eager audience the sensuous life of another culture on a platter” (196). These films are also sometimes difficult to read, but that is not to frustrate the viewers, but rather to “acknowledge the fact that the most important things that happened are invisible and unvisualizable” (57).