(I delivered this short talk during the “Exploring Truths through Research and Art,” a workshop for PhD students interested in integrating art practices in their academic work. The event was organized by the UBC Transitional Justice Network, and held at the UBC Liu Institute for Global Issues last September 20, 2012. Other speakers were novelist Shyam Selvadurai and visual artist Ashok Mathur. For more information on the questions we tried to address during the workshop, please click here.)

Hi! Good afternoon! There are four sets of questions prepared by Julie and Katherine for this workshop. I hope to address the first set, “How can we use art as a methodological practice in our research?  What are the challenges we should consider when interweaving art and social research?”

Self-referential, self-reflexive art sometimes can be perceived as postmodern solipsism by the scholar, who in her ivory tower, seems to be disconnected from the rest of the world. It is also possible to do art involving your subject, with the danger of being perceived as misrepresenting, if not exploiting the subject. I think that these are two dangers or challenges that we will continuously grapple with as social science researchers using creative methods. I proceed to cite examples from my attempts at using art and film methods in my research on Filipino overseas migration – aware of these two dangers.

One fascinating example from the Philippine conceptual art scene is Poklong Anading’s Ocular. It is an installation consisting of video and photographs. The video at first looks like a mere documentation of Hong Kong’s cityscape. In the photos in the same exhibit, however, Poklong removed digitally the image of his now-deceased mother from the photographs she sent back to the Philippines over a period of 11 years, while working in Hong Kong as a domestic helper, leaving only a black negative space as a powerful metaphor perhaps for her absence and long-distance motherhood. These photographs and the video piece were projected onto all four walls of the gallery, depicting Poklong’s painstaking attempts to piece together fragments of his mother’s life overseas. The striking contrast between the absence of Poklong’s mother and her friends in the portraits, and the presence of the shadows cast by the gallery visitors on the video projection is haunting – the work presents to us a painful reality lived by the artist himself. 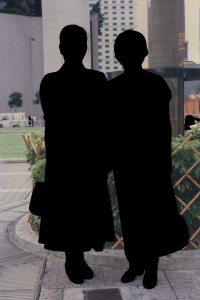 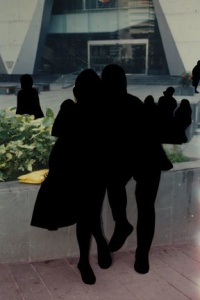 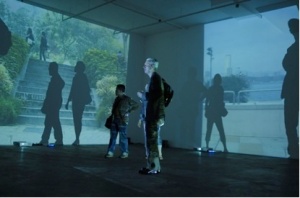 Embedded in this work such as Poklong’s is an intense engagement with personal histories. We can discern an art practice that is deeply influenced, if not carved out of, one’s lived experience, for example through work with ideas and materials sourced from within the artist’s own homes and life stories. Such examples from the Philippines have provided me with avenues for self-introspection in my attempts at making art, and later, at applying art practice in my academic work. This brings me to a brief presentation of my old projects. I think that it is through these reflections that we discover what could be better ways of crafting narratives through the intimate act of crafting our selves.

In 2002, I performed Filipina during my first stay overseas as an undergraduate exchange student in Osaka. Framed as a performance piece, I walked around different neighbourhoods, carrying against my chest a small board with the text “Filipina” written on it. My interest lay in observing how the “Others” would observe the “Other” who might be perceived as different. Since the 70s, Japan has been a major destination for Filipino women who were recruited to work as night club entertainers. The migration of Filipino women to Japan was initiated as part of the interim strategy for the Philippines to spur economic growth through remittances from overseas adopted during the Marcos dictatorship which began in 1972. This performance was staged ten years ago, when I imagined that by walking, simply wearing my skin, and self-identifying my ethnicity, could be a way to explore the strangeness of being in a land where there are gendered stereotypes related to being female, and to being Filipino. While female and coming from a family of rural-to-urban-to-overseas migrants, my privileged and stable status as a middle-class international student, was admittedly incomparable to the precarious situation of many of the Filipina entertainers in Japan. Indeed, what feelings of internalized gendered mobility and racialization did my artist statement claim to address? Poklong’s work — Ocular — which I showed earlier, is powerful because it serves as an important reminder of the weight that the “cultural force of emotions” (Rosaldo 1989) brings to a work, and which could perhaps be used to great effect in our creative projects, and even in our academic work. Increasingly, I was realizing the force of the emotive and the experiential in the conceptualization of my projects.

Non-Appearance is a work that I did in 2009 that explores the idea of one’s capacity (or incapacity) to cross or stay within national borders. Non-Appearancewas simultaneously a virtually-held performance, and a gallery-based exhibit, whose concept stemmed out of a proposal for another show, which was to be held at the same gallery in Tokyo. The original proposal was to exhibit a documentation of everyday photographs from my three-year stay in Tokyo as a graduate student. However, this could not materialize as I was refused a visa to Japan. Following this development, but determined to make do with whatever was available, I opted to still hold the show, now collaborating with the gallery director, to reflect on one’s inability to cross borders. On the opening night, one wall showed a live stream of myself, via the Internet, in my room in Manila, attending the event remotely as a testimony of my absence. On the other wall was a projection of a video-performance by the gallery director. Following my visa refusal, the gallery director volunteered to trace my steps around Tokyo and videotape the places I had anticipated to visit. 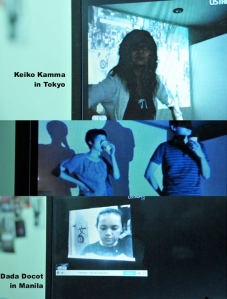 Non-Appearance (2009) by myself and Keiko Kamma

One of my projects in which I believe I have found the right balance was my 30-minute film, Restless. In this film, my mother travels from our hometown to Manila, not for mere leisure, but to fulfill a dream — to receive a visa to the United States. Shot in two days, the documentary follows my mother as she gets ready for the big interview, preparing to perform an “identity” that will enable her to cross national borders. She is accompanied by my aunt who had been refused a visa three times. My mother had missed my sister’s wedding, and she was desperately hoping to see in Los Angeles her first grandchild. The final cut was arrived at through several edits requested by my own extended family – for instance, the omission of any mention of my sister’s previous status as undocumented migrant for nearly a decade.

Paul Stoller (1992) writes of knowledge as “situated, negotiated, and part of an ongoing process.” I see the works mentioned so far as a way of situating my subjectivities in the continued exploration of the potential of art practices – or of the experience and production of concept-based art and research – in the dissemination of the narratives of the Filipino diaspora. I wish to suggest that subjectivities are comprised of layers of personal, social, and collective histories. Subjectivities are cumulative, and transformable, as seen in the progression of works I have introduced today. With my relatives who are migrant workers now spread across the globe, and as a citizen of a state that takes pride in its “world-class” human labour, and as a student and occasional artist who attempts to reflect on the Filipino diaspora and the diasporic experience – the possibilities for developing or contesting one’s subjectivities are endless. While these subjectivities transform over time, they remain in constant tension with the positionalities of fellow Filipinos – my research “subjects” — despite the solidarities envisioned, imagined, or at least hoped for by the author, artist or scholar. I hope to make a point how political intentionality, despite being called one of the “interesting fallacies” in art (Hiller 1985), may be part of a project that is situated within one’s explicit attempt to politicize the personal. Auto-ethnographers are oftentimes accused of navel-gazing, yet the exploration of the personal, and the blending of the intimate narratives into national and global politics, I think, is one of the ways through which we can commit and invest our very selves to projects, which as Dorinne Kondo says, “matter deeply.”